Los Angeles, CA—March 2020… Like many audio professionals, Braeger Moore started out as a performing musician before turning his attention to recording and audio engineering. A native of Texas, he graduated from Texas Tech, then attended the Conservatory of Recording Arts and Sciences in Phoenix, where he met future business and creative partner Nate Greene. The two migrated to Los Angeles in 2013 and opened a small recording studio, mostly producing, mixing, and mastering records for hip hop and indy artists.

“We were interested in immersive audio for sound design, film, games, and installs,” Moore recalls, “and installs caught our attention first. We wanted to work with director Adam Amaral of Master of Shapes but he was working with game engines, and we didn’t have experience with that.” To learn the tools, Moore designed a game, in collaboration with his two partners. They showed the game to Amaral, who agreed to work with them. That was Canopy LA’s entrée into installation work.

By late 2018, Moore was looking for the best way to tap into complex speaker arrays, including nontraditional ones. “I picked up Spat Revolution and learned my way around it, with help from FLUX::Immersive,” he relates. “Then a project came along for Facebook/Oculus where we had the opportunity to use Spat to achieve our vision.”

The project was a temporary install for an event at the historic Los Angeles Theatre. “People showed up to watch a movie and had no idea what was about to happen,” recounts Moore. “Previews start to roll, it looks like a normal commercial for a game, and then all of a sudden — boom!— the commercial explodes out from the front screen and lights up the entire roof, the sides, and all the way behind people. We showed immersive commercials for four different games, which required a combination of projection mapping of the entire theater in 360° in conjunction with holograms at the very front.”

The three-level venue seats more than 2,000 people. “We’d never done anything that huge before,” Moore discloses. “We knew we would use a lot of speakers and high channel counts, and we wanted to address each of the speakers discretely. Spat Revolution is the best and most intelligent choice for that. Spat is great to work with. You can design the layout specifically and modify it creatively. You have a bunch of different algorithms to choose from, and certain objects and motions suit different use cases. There are no boundaries to Spat except computing power, and it runs on a Mac or Windows PC. I shopped around for spatial audio solutions, and one person wanted $40,000 for a standalone hardware unit; that will never work for us.” 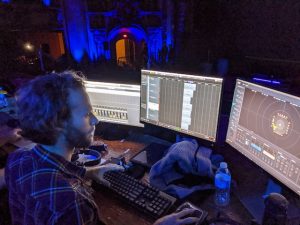 The Facebook/Oculus project didn’t use conventional commercials with voiceover. “The idea was to put you in the game,” clarifies Moore. “A good example of using Spat, and one of the most impressive for the people experiencing it, was the commercial for a game called Moss. This serpent starts in the front of the screen and crawls all the way around the back of the theater, crawling through the walls and being hidden and then exposed, so you know he’s around you. Then he shows up back at the front of the screen and roars. We had 25 discrete addressable channels of audio, so as the serpent crawled around behind people, we tied the sound to the motion, so you hear him moving through rocks and making creepy noises and that sort of stuff. The sound varies as he’s moving through the different surfaces and areas. It was super fun.”

In another commercial, a discus flies around the room and bounces off the walls. “That was one where I wish we had more speakers but Spat definitely helped that sound of bouncing around the room,” Moore states. “We did different effects for each area.”

Moore can’t imagine accomplishing this type of project without Spat. “Doing a smaller array that sums a lot of speakers into left and right wouldn’t be nearly as effective,” he notes. “And rendering each channel individually would be impossible. With Spat, each speaker was accounted for in the model and carried the correct part of the program. We’re usually working on really tight timelines, and the hugest optimization we implemented was using Spat to deal with the entire mix all at once.”

Canopy LA also used Spat at a recent Verizon off-site Super Bowl celebration. “The part involving Spat was unplanned until the day before launch,” muses Moore. “The main experience was a 7.1 presentation in a dome, which we did. The day before it went live, the client asked us to design sound for the hallway leading into the dome, using ten speakers down the hallway. So I created a Spat session at home, modeled the hallway, and designed effects emulating going out into a stadium. At the front of the hallway was a loud crowd, and as you got toward the back of the hallway it became a reverberating, less present crowd so it felt like you were getting further away but with the echoes of the hallway. Spat was perfect for that. And we did it in one night. Anybody else probably would have turned that down but with Spat, we could do it. My team and I love Spat because it makes high-channel-count, custom projects possible, and we can do them quickly.”