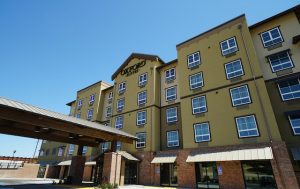 Paso Robles, CA—September 2019… Located halfway between San Francisco and Los Angeles on California’s Central Coast, Paso Robles is filled with wine, olives, hot springs, beautiful rolling hills, and sunny weather – exactly the picture many have of what the state is all about. Unsurprisingly, the city is not only a popular tourist destination but also a great location for conferences and business meetings.

The brand new Oxford Suites Paso Robles is a hotel aimed at satisfying all of those demands. The latest addition to the Oxford Collection—a group of 17 hotels in 4 states aimed largely at business travelers—the Paso Robles property will formally open in its downtown location in September 2019 with 101 executive suites, a 1,605 square foot ballroom, 2,500 square feet of meeting space, a boardroom, and an array of amenities, right down to electric car-charging stations. A second construction phase will add 40 more rooms.

Over the last half-dozen years, the Bend, Oregon-based Oxford Corporate parent company has partnered with local design/build firm Audio Visual Bend to create and install audio and video systems for the public and business spaces of its new properties. “We did a proof-of-concept install at one of Oxford’s early boutique hotels here in Bend, upgrading it from a home theater AV system to a commercial AV system,” recounts AV Bend AV Designer/Project Manager Tony Sprando. “They’ve been ecstatic with the ease of control of the system.” The Paso Robles location is the fifth Oxford Collection property on which AV Bend has worked.

AV Bend creates the ease-of-use that so enthralls Oxford Corporate by deploying Symetrix DSP networks and control panels to provide media services through the primary hotel areas. In Paso Robles, AV Bend installed a Symetrix Prism 12×12 DSP and a Prism 8×8 DSP to cover the meeting rooms, boardroom, and public spaces, which include the pool, garden, port cochère (drive-thru entrance area), lobby, bathrooms, bar, and dining room. With so many areas to cover, AV Bend needed the ability to configure a number of different zones, as well as easily cover the distances involved between the spaces. The Prism processors are equipped with Dante networking and a wide selection of I/O configurations and options, making them a versatile choice for installation into multiple Oxford projects. “We’re trying to be very flexible,” Sprando explains.

Music distribution, possibly the most common audio task in hotels, is one of the areas where Symetrix products delivered flexibility. “The two primary background music sources are Pandora for Business/Mood Music playlists,” Sprando observes. “One playlist is for the public spaces, while the other one is designed for the meeting rooms and boardroom, so the hotel can choose different genres for events that might be happening in those private areas. Furthermore, they can pull background music from the hotel into the meeting rooms, then turn that off and seamlessly transition into a presentation.”

Areas like the bar and restaurant have very simple control needs, requiring nothing more than a volume control for background music. In these areas, AV Bend installed Symetrix ARC-K1e modular remote control panels, which offer a rotary encoder with a button and a few LED indicators. For the meeting rooms and spaces that may need to route and switch sources or perform other control functions, ARC-3 adaptive remote control panels were put in. The ARC-3 features a touch interface and a menu system that can be programmed to perform complex logic-based events such as preset selection, source selection, and room combining.

The business meeting areas, having more sophisticated facilities, presented greater control needs. The meeting rooms are actually one large room that can be partitioned. Each of the resulting two rooms includes a projector and screen for video and is capable of hosting a wireless handheld microphone and a wireless lapel (lavalier) microphone. Event attendees can carry in a laptop and connect it through an HDMI jack or a VGA connection on a wall panel.

In the boardroom, laptops access the network via an HDMI jack built into the table. In addition, the boardroom has a Dell PC built into the room’s TV, controlled by a wireless keyboard and mouse. The boardroom facilitates participation by people in offsite locations with an interactive touchscreen, camera, and microphone.

Oxford Corporate has been opening a new property every year, and Sprando expects to keep installing Symetrix systems in new properties as they are built. “In the last five hotels, we’ve had very few service calls about the audio system. The Symetrix products have proven themselves to be quite reliable,” he concludes.