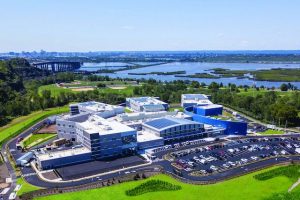 Secaucus, NJ—October 2019… While private schools and charter schools get a lot of media buzz, public schools aren’t standing still. One shining example is the Hudson County Schools of Technology (HCST), a New Jersey public school district. Having outgrown its main campus in North Bergen, HCST recently completed construction of a new main facility on the 20-acre Frank J. Gargiulo Campus in Secaucus, a few miles away. The 350,000-square-foot campus, built in only 27 months at a cost of $154 million, houses High Tech High School, Knowledge and Advanced Skills Prep, and Hudson Technical, in addition to HCST.

The HCST building incorporates advanced AV technology designed and installed by East Rutherford-based Masque Sound, with Symetrix Edge DSPs at the heart of the system. “The school is all new construction, focused on technology,” begins Keith Caggiano, Senior Project Manager for Masque. “Our portion of it encompassed a 325-seat auditorium, a 120-seat black box theater, a gymnasium, a recording studio, and a TV production studio, the majority of which had system processing by Symetrix.”

“The gym is for large gatherings, commencements, pep rallies, things of that nature,” reports Matt Peskie, Masque’s Installations Department Manager. “It has a large project screen and enough PA to support everybody in the program with wireless mics. The auditorium is more for production, so it has a lot more wireless mics, some backstage displays, and a projection screen for slide presentations. The recording studio is for straight-up audio recording, and the TV production studio is doing both audio and video recording. The black box theater is, of course, the ultimate flexible space that can be used for any kind of production, plus they have a few podcast studios.”

In between the Yamaha CL consoles anchoring most of the Masque-designed facilities and the L-Acoustics loudspeakers sit four Symetrix Edge DSPs, one each in the gymnasium and black box theaters and two in the auditorium. Each Edge DSP in the auditorium is equipped with an xOut 12 analog output expander.

“The backbone of the system is Dante networking, which allows for integration between the spaces and routing signals back and forth,” reveals Peskie. The difficult part was integrating multiple spaces while at the same time keeping isolation between them. Accomplishing this was a matter of providing appropriate routing capabilities while managing access to the system. “At the heart of all the setups in all of the spaces are the Symetrix DSPs, which are driving the whole system,” Peskie notes. 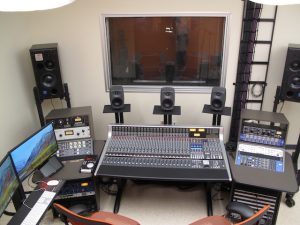 Caggiano illustrates some of the routing considerations by citing two of the numerous use cases at the facility. “They have automated, basic presentations, as well as large-scale musicals or performances with an operator,” he says. “There’s a bit of a crossover between how many inputs are consumed in the automated systems versus the number allowed for in a full system capability scenario. The Edge processors were central to the ability to switch between those use cases so that they can control an automated signal process from a Crestron touch panel, while also allowing full-scale control from the Yamaha consoles and multitudes of wireless inputs.” Control of routing in the Edge processors for these applications was handled by Dante Domain Manager software. “The Symetrix products, being Dante-based, fed into that nicely,” remarks Caggiano.

One of the trickiest aspects of the design was configuring the system to serve both skilled and unskilled operators. The systems are often used by students but operators with more training and experience are at the controls for larger productions requiring access to more resources and sophisticated functions. “We broke it down in a few layers of security,” Caggiano reveals. “We restrict the routing of each space with Dante Domain Manager so you can’t accidentally log into another venue entirely and change the routing structure, say, of the recording studio when you’re in the black box theater, or of the auditorium when you’re in the gym. The Symetrix SymVue software allows us to take it a step further and control I/O relative to the scenario. An everyday lecturer will come in and have access only to a few wireless mics that are all preset, with system control from a touch panel, while a skilled operator can use a password to unlock the full system capability, use the console, and really get in and manipulate things.“ “The Symetrix Edges played a critical role in allowing overall system control of all of the different AV systems,” adds Peskie.

Past experience pointed Masque toward using Symetrix DSPs. “At Masque, we’ve been fans of Symetrix products for many years,” Peskie affirms. “We love the ability to allow users to go only as far in depth in the system as we want them to, using SymVue pages we create for specific jobs. We can allow the end user access just to basic system EQ, or more in-depth control of parameters, be that matrix routing or individual gain controls. Another factor is that the Symetrix products meld nicely with control systems.”

Caggiano agrees that the capabilities and features of the Symetrix Edge were critical to meeting the full range of demands imposed at HCST. “Hudson County was a fairly complex project with a lot of moving parts and a lot of variables. Symetrix was a linchpin in the middle of all that and allowed for some system operability that would have been difficult to achieve with other products.”