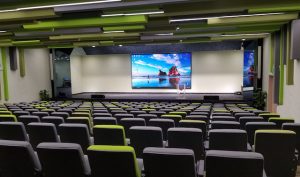 Foshan, Guangdong, China—September 2019… Foshan is a city of 7 million people located north of Hong Kong and south of Guangzhou, in the densely urbanized Pearl River Delta region of China’s Guangdong province. Foshan’s Shunde district is one of the wealthiest counties in China and is renowned as a center for Cantonese cooking and the home of the prestigious Guangdong Shunde Desheng School and its international division, Desheng School International (DSI).

Founded in 2001, with DSI added 10 years later, the Desheng School has burnished its reputation for academic excellence with multiple international accreditations and a student body that has grown to 10,000. The school maintains high standards and first-class facilities. Since 2014, Desheng School has chosen to equip sound systems throughout the primary and middle schools with loudspeakers from Renkus-Heinz.

The 2014 project added a sound system in the middle school’s 2,300-capacity assembly hall and included eight Renkus-Heinz ICONYX digitally steerable array loudspeakers and 16 of the company’s CF-series point-source loudspeakers. The lecture hall on the top floor of the middle school’s library building was equipped a few years later. Although the lecture hall was originally designed for large-scale meetings, the school decided to install a system that would also be suitable for performances and put in a pair of Renkus-Heinz’s powerful CFX151 two-way Complex Conic loudspeakers, each of which features a heavy-duty 15-inch woofer and a 2-inch titanium high-frequency driver.

The most recent project was the largest, with Beijing-based TICO Digital Group (currently celebrating its 25th year in business) installing more than 80 Renkus-Heinz cabinets. New systems were installed both inside and outside of the primary school’s sports hall, and upgrades were performed on the systems in the lecture hall and assembly hall. “Renkus-Heinz is a world-famous brand, and TICO was able to offer the excellent quality produced by the speakers at a reasonable price,” offers Deshgeng School Chairman Chen Ji Ye. The assembly hall system was considerably beefed up with the addition of a dozen Renkus-Heinz PN102-LA-52R line array loudspeakers and two ST4/94R three-way Complex Conic loudspeakers. The Renkus-Heinz ST4/94R is an extremely accurate and powerful speaker that can produce peak levels up to 133 dB SPL. The low frequencies in the very large assembly hall were in particular need of help, sounding weak at 25 meters (82 feet) and barely audible at 40 meters (131 feet). TICO definitively solved this issue with four Renkus-Heinz DR18-2R dual 18-inch direct radiating subwoofers, with response down to 32 Hz and an earthshaking maximum peak output of 135 dB SPL. A digital signal processor and audio mixer were installed in the hall to source signals to the loudspeakers.

The recent upgrades have made a difference that is being remarked on at both the primary and middle schools, and maintains the high quality for which the school is renowned. “The Renkus-Heinz loudspeakers significantly improved the sound systems in the school,” notes a satisfied Mr. Chen.