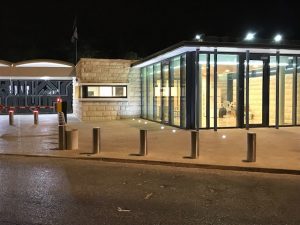 Jerusalem, Israel—May 2020… Inaugurated in 1971, the Israeli President’s House (Beit Hanassi) is much more than the official residence of the nation’s President. The building, located in Jerusalem’s Talbiya residential neighborhood, is also a museum and a facility for hosting a variety of high-profile events. World leaders and journalists converge at Beit Hanassi, which includes a visitor center and a garden where visiting heads of state traditionally plant olive trees, in addition to the expected meeting spaces, offices, and the President’s living space. Both house and garden display works of fine art representing the history of the Jewish people. The building’s main meeting space hosts outside groups, as well as lectures, presentations, government functions, press conferences, and more.

The President’s House has undergone significant renovation over the past 10 years, including new technical systems designed and installed in 2019 by Charmer Group, Israel’s leading AVL systems installers. As part of this project, Charmer Group provided a Visionary Solutions video network for the building’s main meeting space and an outside area, along with a Dante audio network.

“We’ve been using Visionary Solutions products for a while,” offers Charmer Group co-founder and co-owner BaBu Levy. “I try to spec Visionary Solutions as much as I can because I want technology that is reliable. I’ve never had a problem with Visionary Solutions products, from the first time we used them to this day. Beit Hanassi is, of course, a high-profile installation. In Israel, everything is a hot topic in the news, and news broadcasters are flying in and out of this meeting space, so we cannot have lost connections or other issues. We need a system that just works, and that’s one of the biggest reasons we chose Visionary Solutions encoders and decoders.”

Levy’s team provided Visionary Solutions E4100 POE 4K UHD over IP video encoders for a computer and a BrightSign player, which are routed over the Dante network. Visionary Solutions D4100 decoders feed several televisions and a Christie projector for a Sony 95-inch projection screen within the main meeting room. Additional D4100 decoders serve another Christie projector with 95-inch screen and more TVs in an outside area.

The system connects to the IP network with Cisco GS350-series switches. “There six or seven independent switches throughout the building,” Levy calculates. “Configuring the Cisco switch for the Visionary Solutions system was quite simple. On the switch that carries the Visionary Solutions network we also have two VLANs for control and for part of the lighting system.” 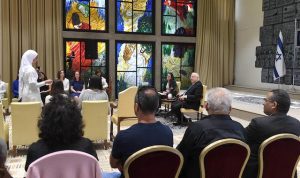 A QSC Q-SYS Core 510i processor manages the overall AV system. “The Q-SYS Core 510i is integrated with an older Crestron system because some parts of the building haven’t been changed yet—that is Stage 2—and are still using Crestron,” Levy explains. “To ease the transition, we built everything in Q-SYS. We built a Dante audio network, and they have a Yamaha CL3 digital mixer, but the building staff prefers to work with the Crestron touch screens rather than the mixer. So the microphones go directly to the Q-SYS Core 510i and from the processor directly to the amplifiers.”

Charmer Group is no stranger to high-profile projects, having installed AV systems in sports stadiums, arenas, government buildings, corporate facilities, and the finest theaters in Israel. “If it involves out of the box thinking and multimedia in Israel, it’s natural that Charmer Group would be involved,” Levy confirms. “In this case we had excellent partners as well, including Mr. Harel Tabibi, our AVL consultant; Ronen Najar, who handled architectural and stage lighting; project manager Shimon Pick; and Simul LTD, the operating company.”

But even with their many years of experience, Levy and his team could not have anticipated the degree to which Israeli politics would complicate the AV project at the President’s House. “In Israel they have not been able to form a government, so we had three elections within a year,” Levy explains. “The party that gets the most votes gets the mandate from the president to form a government, and they come to the President’s House for those meetings. As a result, our schedule was pretty crazy. We had to do one stage of the system, then go back and do some more, then wait a bit, then go back again. We sometimes had to uninstall a component, then reinstall it later. If you saw photos of the installation in progress, you might see a TV and then not see it; you’d see speakers and then you wouldn’t see speakers; you’d see a video wall and then you wouldn’t see a video wall.”

By December 2019, the video system and the audio for the main meeting space were at last finished and operating, although Charmer Group continues to install systems in other areas of the complex. “Now that it’s done, the system works great,” reports Levy. “Everybody’s happy.”

Image courtesy of the Spokesperson Unit of the President of Israel