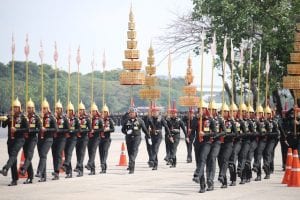 Bangkok, Thailand—August 2019… His Majesty King Maha Vajiralongkorn Bodindradebayavarangkun (Rama X) of Thailand commenced his reign on October 13, 2016. Following ancient tradition, the formal Royal Coronation Ceremony was conducted over three days, May 4 to 6, 2019, including the Royal Procession on Land on May 5. In this formal procession , the King rode in a royal palanquin, encircling the city so that the people might attend and pay homage to their new King. Beginning at the Grand Palace, His Majesty traveled 6.7 km (4.2 miles), paying homage to the main Buddha images at three major temples before returning to the Grand Palace.

The procession is an ancient tradition but providing sound reinforcement suitable to a royal procession on the streets of Bangkok called for the latest in audio technology. Fuzion Far East Ltd, one of the most respected AV suppliers in the region, was honored with the assignment of designing and setting up the audio systems for the entire parade, working closely with the Thai Royal Army. To handle this massive task, Fuzion designed a Dante digital audio network in a star configuration with 11 loops, employing miles of fiber optic cable, and managed by 49 Symetrix Radius 12×8 EX DSP units.

“The parade had many microphones for instruments and for announcements,” recalled Fuzion Far East Technical Director Varuit Rattapongfrom. “The audio routing needed to change many times along the way. For example, from Point A1 to A5 was one band, then after that was a different band playing different instruments and using different microphones. We also provided the broadcast feed.”

This was the first Royal Coronation Ceremony since 1950, and the Fuzion Far East team needed to ensure the network would operate optimally throughout the procession. “Symetrix Radius processors were the best solution for the job,” asserts Rattapongfrom. “The Radius is reliable, the sound quality is very good, and it’s easy to control. We mostly used the DSPs for routing and EQ.” User control was provided for monitoring, leveling, feedback suppression, and the EQs.

Designing, installing, and operating an audio network and sound system of this magnitude for an event of such supreme importance was a tremendous challenge, but Fuzion Far East succeeded admirably, with help from the Royal Thai Army. Symetrix Radius 12×8 EX did indeed prove to be the right solution as the core of the network. “The Symetrix processors and Dante network worked very well,” Rattapongfrom reports. “we didn’t need technical support, and our client was very satisfied with the results.”