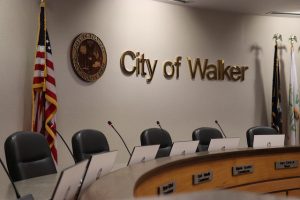 Walker, MI—January 2020… First organized as Walker Township in 1837, Walker, Michigan (www.walker.city), was organized as a city in 1962 and is now home to an estimated 25,000 people. The northwestern suburb of Grand Rapids is governed by a commission of seven elected officials—the mayor and six commissioners—and a hired city manager. Walker’s current City Hall was built in 1964.

Until recently, the Commission Chamber at City Hall suffered from an outdated sound system, some of it as old as the building, making it difficult to hear and record meetings. Some of the issues were resolved with the installation of a new sound system in the ceiling—but not all. “We still had people who couldn’t hear in the back of the room,” recalls Walker City Clerk Sarah Bydalek. “We had ceiling mics that were on all the time so they picked up a lot of background noise, and we couldn’t turn them up high enough.” 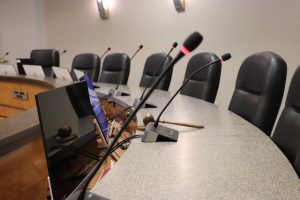 hnology—she is a leader in the movement to enhance technology in city government—Bydalek discovered the Televic D-Cerno plug-and-play digital discussion system at an International Institute of Municipal Clerks conference around the time that Walker was revamping its Commission Chamber audio system. “When I found the Televic discussion microphone system, I thought, ‘we need to add this,’” she states.

However, Bydalek initially wasn’t sure whether the Televic system would integrate well with their new sound system. “I contacted Televic, and they came out to demo their microphone system, which was very helpful. They showed us the difference between our old microphones and their microphones.”

Televic’s D-Cerno system is a complete solution in which up to 50 D-Cerno microphones connect to a central unit that handles audio routing and provides built-in audio recording on a USB flash drive for transcription of minutes and archiving. “We now have 12 microphones total: One at the podium, one at the computer where we set up the agenda, and 10 on the dias,” details Bydalek.

Until they tested the Televic system, the mayor and commissioners had assumed they could hear well on the dias, even though the ceiling speakers were many feet away. But the Televic D-Cerno system was a revelation. With a built-in speaker in each microphone stand for monitoring the mix from the central unit, the sound was directly in front of each participant, providing impeccable audio across all 30 feet of the dias’ width. 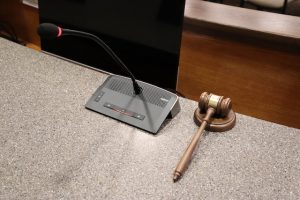 Another important feature was the push-to-talk switch on each mic stand. “Because the mics can be individually switched on and off, you don’t hear people shuffling papers or sidebar discussions,” Bydalek explains. “They only press to talk. And because they’re talking directly into the mics instead of using ceiling mics, we can raise the overall level in the sound system so the sound can be heard in the back of the room. The clarity is much better, too, which has been great for our live stream to our website and for recordings for minutes.”

Bydalek is convinced the city made an excellent choice. “The Televic system sounds great and is very easy to use, and Televic’s service was awesome,” she declares. “We are very, very happy with it.”