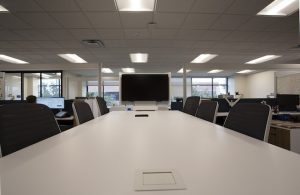 West Des Moines, IA—October 2019… Boasting nearly two dozen locations, plus ATMs in even more spots, in May 2019 Bank Iowa opened a new corporate headquarters in West Des Moines, Iowa. The new facility accommodates training, meetings, and administrative offices for departments such as accounting and Internet banking, and offers such workspace perks as art from the owners’ extensive collection and desks operated with a mobile app.

To design and install up-to-date AV systems that would support its current needs and provide for future expansion, the bank brought in Iowa Audio Video (IAV) of neighboring Clive, Iowa. Drawing on the experience of countless previous designs, IAV owner James Harle specified digital signal processors from Symetrix to route audio and control the facility’s systems. “They wanted us to meet AV needs for two training rooms, a boardroom, huddle space TVs throughout the building, and sound making for the whole facility,” details IAV Operations Manager Mike Holmberg, who managed the install and programmed and commissioned the system.

The large training room and the board room are managed by a Symetrix Radius AEC processor. The training room is equipped with six Audio-Technical ES933 hanging ceiling mics, taking advantage of Radius AEC’s dedicated wideband acoustic echo cancellation (AEC) processing, zero-latency direct outputs, and discrete references per AEC channel. In the boardroom, two Shure MXA310 table array microphones send up to five channels of audio each over a Dante network to the Symetrix DSP.

The Radius AEC’s basic audio duties are supplemented by facility control tasks normally performed by a wall-mounted control panel. Rather than executing triggers and commands, the RTI KX7 touch panel passes them to the Radius AEC for execution. “We’ve paired the RTI controllers with Symetrix processors many times,” Holmberg comments. “It’s very simple to get them to work together, and everything went smoothly.” 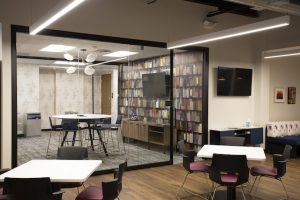 A Symetrix Radius NX 12×8 DSP with 12 analog inputs and 8 analog outputs controls the small training room system. This system has two Audio-Technica ES933 hanging ceiling mics and a Audio-Technica belt-pack wireless mic for hands-free presentations. A belt-pack wireless mic from the large training room also feeds to this Radius NX 12×8. The two Symetrix DSPs are linked via Dante, enabling the NX 12×8 to share the Radius AEC’s acoustic echo cancellation for the wireless systems.

The training rooms and boardroom are set up for Skype or other video conferencing, and their respective Symetrix processors are tied together for cooperative applications. The boardroom and each of the training rooms are set up as separate zones in the DSPs. The huddle space TVs receive control signals from the Symetrix units, but not audio, so they do not need to be assigned to audio zones. Audio outputs from the Symetrix processors run in the analog domain to Crown amplifiers, which drive Bose FreeSpace speakers.

Video is distributed though the spaces using Just Add Power products, so all video travels as HD-over-Ethernet. As with the audio, RTI controllers provide users with a visual interface, but the Symetrix processors do all of the stream management. “It’s nice, with the Symetrix, to have a product that I can deploy and have it just do everything for me,” remarks Holmberg appreciatively.

Rather than hide away all of its shiny new AV and IT equipment, Bank Iowa decided instead to feature it. “The building is more or less designed around the IT rack and room, which is kind of a showpiece,” Holmberg describes. “It’s glass-enclosed and situated right in the middle of the main area. Bank Iowa brought in a muralist to paint a mural on one of the back walls, which is made of drywall, not glass, and the racks are backlit with blue LEDs, so they glow.”

IAV turns time and again to Symetrix to anchor their systems for reasons that go beyond the products’ broad functionality. “We probably have several hundred Symetrix units installed,” reports Holmberg. “The reason we use Symetrix is that it’s stable, the audio quality is very good, and the service from tech support, when we need it, has been great. I love working in the Symetrix Composer software, and with so many Symetrix units in the field, the fact the products are so stable makes them one less thing for us to worry about on a bigger project.”