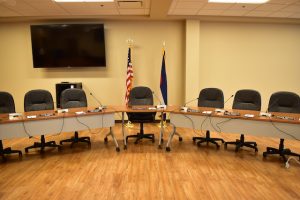 Mead, CO—March 2020… Strategically located along Interstate 25 about a half hour north of Denver, the town of Mead boasts a population of about 4,750 and is expected to double in size over the next ten years, reflecting rapid growth all along Colorado’s Front Range. The seven members of Mead’s Board of Trustees meet at Town Hall, next to Mead Town Park, but until recently their meetings were marred by problems with the Board Room microphone system. “Our old system consisted of wireless microphones that had a lot of dropouts and noise,” reports Town Clerk/Treasurer Mary Strutt. “Our sound system uses ceiling speakers, and with the unreliable microphones, it was difficult to hear.”

Fed up, Strutt and the Board called in Mead-based systems integrator Next Step Communications (https://nextsteponline.net/), which installed a new Televic D-Cerno SL plug-and-play discussion system. “Given the issues we had with our old wireless system, we decided to go with a wired conferencing system, which has worked very well for us,” Strutt remarks. “We bought 13 D-Cerno D SL delegate units and a D-Cerno C SL chairperson unit. For Board meetings, we use eight delegate units and the chairman unit for the Trustees, and we have a tenth unit on a podium in the audience so people can step up and comment and ask questions. The other three units enable us to have larger meetings when needed. The Municipal Court also uses the Televic D-Cerno system.” 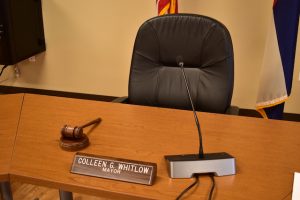 “The microphones are much better than the noisy wireless mics we used to have,” observes Strutt. “They don’t pick up room noise, and they’re wired, so we have no signal dropout. A pleasant surprise was that the built-in speakers sound wonderful; I didn’t realize I even needed them until we had them. Before that we just relied on the ceiling speakers. The Board members can hear much better now. And we really like the indicator light that shows which mic is active.” 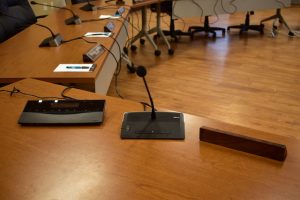 The Televic D-Cerno SL system connects with CAT5 cable to either a basic D-Cerno CU central unit or a D-Cerno CU-R central unit, which adds USB recording directly to a storage medium. Delegate units connect in a daisy chain over the four bus connections (four branches or two closed loops). When cabled in loop, a redundancy mechanism guarantees that the system continues to function flawlessly if a cable should break or disconnect.

Strutt opted for the D-Cerno CU-R, which employs an easy-to-use display on the front, audio auxiliary inputs and outputs on the back, and two USB ports. She uses the central unit’s unbalanced RCA audio outputs to send the system output to the ceiling speaker system so the audience can hear everything. “Now I can record the meetings, and the recordings sound great,” she notes. “I also like that I can quickly set up the system for each meeting and take it down in between meetings. And it’s easy to use; we haven’t needed tech support. But the most important thing is that everybody can hear each other clearly, which I couldn’t say about our old system.”

New R-Series 10 Hardware Platform for Generative Projects, Virtual Production Applications and Complex Media-Based Attractions to be on Show. Full Product Line to be Revealed and Demonstrated from January...